Evaluating the quality characteristics for varieties of local and imported wheat used in the national mills for the production of bread flour and their conformity with the Libyan standard specifications.

This study was conducted on the local wheat variety (kufra), and three varieties  imported from Russia, Ukraine and Germany to find out their conformity with the Libyan standard specifications used in the Libyan mills for the purpose of producing bread flour. Physiochemical tests showed variation in the levels of the thousand-grain and the specific weight. Chemical tests showed the domestic variation in  the lipid content, ash, crushed starch and total water-soluble pentosans. Protein and wet gluten was high in the German and Ukrainian cultivars. Pearson correlation coefficient between the specific weight and the extraction ratio indicated the existence of a direct relationship and a strong positive correlation. Falling number showed a decrease in the activity of Alpha-amylase enzymes. Flour of German and Ukrainian varieties were superior to the time of maturity and stability of the paste. The physical tests on the bread indicated the superiority of the bread made from German and Ukrainian flour. Sensory tests confirmed that the flour of the German and Ukrainian variety met most of the conditions indicated in the Libyan standard for bread flour, as well as the local and Russian variety. The results of the study showed that there were no statistically significant differences between the bread loaf produced from German and Ukrainian wheat flour, but there were significant differences in the loaf of bread between the German and Ukrainian varieties on the one hand, and the local and Russian varieties. 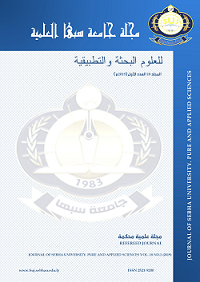